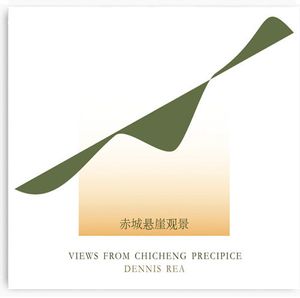 Cover art by Tiffany Lin
Purchase Views from Chicheng Precipice
Guitarist and composer Dennis Rea presents a completely different but equally compelling facet of his musical personality with his most ambitious release to date, Views From Chicheng Precipice. A key presence on the Pacific Northwest creative music scene for decades, Dennis Rea was also a pioneer in introducing modern jazz, adventurous rock, and experimental music to Chinese audiences, as detailed in his book Live at the Forbidden City: Musical Encounters in China and Taiwan (Blue Ear Books, 2015). While living in both locales from 1989 to 1993 and on subsequent concert tours and travels, Rea became deeply enamored of the traditional music of China, Japan, Korea, and Vietnam. Views from Chicheng Precipice is Rea’s homage to the music of East Asia, a collection of uniquely personalized interpretations of traditional pieces and original Asian-inspired works, performed by some of the Pacific Northwest’s most renowned instrumentalists, including trombone avatar Stuart Dempster and koto master Elizabeth Falconer. Blending striking arrangements of ancient and contemporary themes with sonic experimentation and expansive improvisation, Views from Chicheng Precipice is at once boldly unorthodox in its choice of instrumentation and treatment of traditional musical material, and warmly respectful of its sources. The result is a sonorous and surprising listening experience that goes far beyond typical attempts at ‘East-West fusion.’

“In formulating these arrangements of some of my favorite Chinese, Taiwanese, and East Asian ethnic minority pieces, I sometimes chose to honor traditional formal constraints, e.g., limiting improvisers to a particular set of scale tones, or eschewing the use of Western-style functional harmony. In other cases I threw custom to the winds—harmonizing passages, employing atypical instrumentation, and incorporating noise, chromaticism, free improvisation, and amplification—while striving to remain faithful to the spirit of my models. The project is my ‘love letter’ to a part of the world that has enriched my life immeasurably, musically and otherwise.” — Dennis Rea

“The achingly reflexive music is pervaded by an Eastern spirit that seems to hover all over the album, though without indulging in déjà vu or mere nostalgia. This is, indeed, music that is ancient and modern at the same time, as it manages almost magically to achieve a timeless quality. Without coming across as laboured or frantic, Rea’s elegant yet sharp guitar engages in a dialogue with the Eastern and Western instrumentation provided by his trusted partners. ... Pure magic.”—Maurizio Comandini, All About Jazz Italy

"Everything is exactly right about this album. ... I do not often utter the word ‘masterpiece,’ but I would do it for this CD.”—Herman te Loo, Jazz Flits (Netherlands)

“It does for [traditional Chinese music] what Miles and Gil Evans did with Spanish music on Sketches of Spain, this time with Rea's guitar taking a prominent role and the musical ensemble providing an intricately enmeshed pastel sound quality filled with light and shadow. ... It is an achievement that has no real parallel in the music offerings out there lately. And it reconfirms that Dennis Rea is an important emergent figure on the music scene of today.”—Grego Applegate Edwards, Gapplegate Guitar & Bass Blog (USA)

“Spectacular—a perfect fusion of modernity and tradition. ... Views From Chicheng Precipice is a brave record in its choice of instrumentation and respects the arrangement of the traditional musical material. The result is an amazing listening experience that goes far beyond the usual attempts at fusion between East and West."—Daniel Orlandi, La Voce (Italy)

“...a profound work, essential and nuanced, to be seized with repeated plays”—La Luna Alfonso (Italy)

"...a sonic experience that is some of the best we've heard when the music of West and East are merged. Such is only possible to achieve when the musical skills are at a sky-high level and combined with understanding and respect for the two initially partially polar musical cultures. ... even after countless plays, there is constantly something new and exciting to discover. Therefore, if you can only have one record in 2010, perhaps this is the one! ... boundlessly interesting, with enormous potential to enrich the listener’s life"—Merlin Prog (Norway)

"[Dennis Rea's] guitar, imitating the ways of the East in its inflections, takes us through rice fields and the mountains of Tibet to the plains of Korea and Vietnam. ... Views from Chicheng Precipice ultimately symbolizes the perfect fusion between tradition and modernity in the form of a beautiful tribute by a great musician to a culture that has fascinated him. Unique, and I’m terribly enthusiastic about it!”—Mr. Blue, Music Waves (France)

"...these artists are among the best of the best of this region at what they do... a pleasure to listen to from beginning to end. ... chock full of musical magic. It's playful, serious, deep, wide, high, and always interesting."—Lee Henderson, Prognaut (USA)