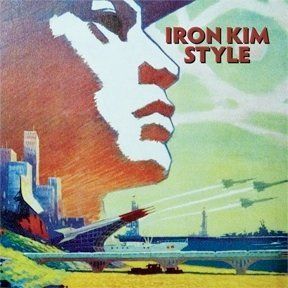 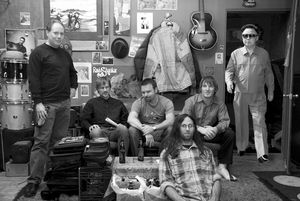 Named after the acrobatic martial arts approach espoused by Grandmaster “Iron” Kim, and taking playful aim at deranged North Korean dictator Kim Jong-Il, Iron Kim Style’s eponymously titled debut CD is a totally improvised outing that stands in stark contrast to most specimens of the free-improv genre. The quintet has no purist axes to grind here but gleefully blends structure and abstraction, lyrical melodies and scalding noise, wicked funk and weightless balladry, jazz phrasing and bracing experimentalism into a rich and meaty sonic stew. The resulting music frequently sounds as if it were composed, due to the finely tuned listening skills of the participants after years of collective music-making. Iron Kim Style's debut CD is available on MoonJune Records.

“One of the best albums of the year ... The energy of this album is really unparalleled. And the consistency of the project is above all suspicion. Even old Miles would be very proud of these grandchildren based in Seattle.”—Mauritius Comandini, All About Jazz (Italy)

"Fans of jazz-rock played with plenty of chops, as well as emotion and humour, will be delighted by Iron Kim Style, whose improvisational nature is an added bonus in a context where exasperated technical perfectionism can all too often impart a feeling of cold detachment to a recording. Definitely one of the most interesting releases of the year so far.”—Raffaella Berry, The Progressor

“That the entire content was composed on the spot is rather jarring: these gentz follow each other with almost shocking precision, alert to each others' subtlest cues and signs, cohesive while fully independent in each line and measure.”—Mark S. Tucker, Folk & Acoustic Music Exchange

“Although this entire disc is improvised, it often doesn't sound that way. This is jazz/rock at its finest without any of that fusion excess.”—Bruce Lee Gallanter, Downtown Music Gallery (NYC)

“For a fusion album that really is fusion, this is one of the best examples you'll hear in today's jazz-rock world.”—Andy Garibaldi, Dead Earnest (Scotland)

“jazz-rock with powerful, beautiful passages, which come from free improvisation. This is hard to believe.”—Discospat (Spain)